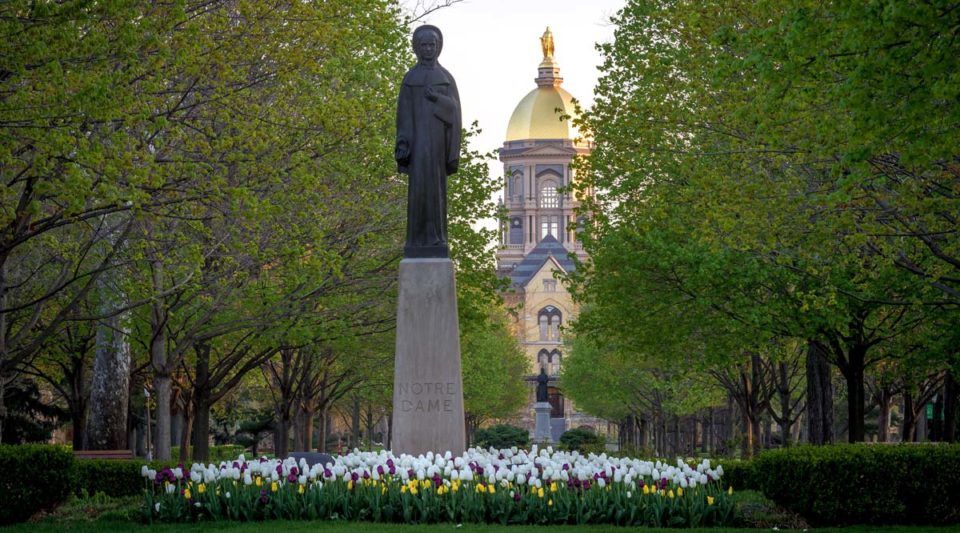 For the past four summers, Amanda Fox, a teacher with Penn-Harris-Madison (PHM) School Corp., has worked closely with Michael Niemier, professor in the Department of Computer Science and Engineering at the University of Notre Dame, to devise ways to incorporate computer science concepts into the existing STEM curriculum at Prairie Vista Elementary School in Granger.

Now, Fox, who teaches third grade at Prairie Vista, is being recognized for that work.

Fox was recently honored as a finalist for the National Science Foundation’s Presidential Award for Excellence in Mathematics and Science Teaching (PAEMST) for her work to develop computer science curricula for students at Prairie Vista and other local elementary schools.

“The recognition is amazing,” Fox said. “I’m just so honored that someone saw I had the skills and knowledge for this, because as an elementary teacher I never thought of myself in that capacity.”

Established in 1984, the PAEMST is the highest honor bestowed upon educators by the U.S. government specifically for K-12 science, technology, engineering, math and/or computer science teaching, recognizing teachers “who have both deep content knowledge of the subjects they teach and the ability to motivate and enable students to be successful in those areas.”

“It’s great that Amanda is being recognized, because she’s put in a fair amount of work, and she’s been super creative in how she has translated things she’s done over the summer into the classroom — both in very conventional ways and in very unconventional ways,” said Niemier, who in addition to teaching co-directs the Hardware-Software Co-Design Research Group, leads the National Science Foundation Research Experiences for Teachers (RET) program and is a theme leader with the National Science Foundation Extremely Energy Efficient Collective Electronics (EXCEL) Center at Notre Dame.

Aside from Niemier, others who contributed to Fox being recognized as a finalist for the PAEMST include Clare Roach, coordinator of the English as a new language program with the Alliance for Catholic Education at Notre Dame, and fellow PHM teacher John Gensic, a past PAEMST winner in science. Roach, a Prairie Vista parent who leads the afterschool program there, introduced Fox and Niemier. Gensic, a past RET participant who now serves as a workshop assistant for the program, nominated Fox for the award.

The PAEMST is given annually to as many as two teachers — one in math and one in science — from each of the 50 states, plus the District of Columbia, Puerto Rico, Department of Defense Education Activity schools and the U.S. territories as a group.

Fox is the only Indiana finalist in math. She and the two finalists in science were honored in April at a luncheon in Indianapolis with Indiana Secretary of Education Katie Jenner. Jenner also recognized Fox, as well as Notre Dame, and the other finalists in her weekly newsletter for state educators.

Through the EXCEL Center, Fox, along with a handful of other local K-8 educators, has worked with Niemier and other Notre Dame faculty, as well as graduate students and computer science educator Kelly Brandon, to develop a foundation in computer science and devise ways to incorporate computer science into the classroom in alignment with existing standards for STEM education in Indiana.

Recently, she had students create book reports and multiplication games using Scratch, a free block-based visual programming language and website, and led students in a “telephone”-style game designed to demonstrate how different parts of the computer communicate. She also works with Roach to incorporate computer science into the after-school program at Prairie Vista.

“They love it, they crave it,” Fox said of the students. “And once they see the connections to how it works in the real world, they want more of it.”

Last summer, while continuing to develop original content for her classroom, Fox also participated in research activities alongside Notre Dame graduate students as part of the RET program, which typically is aimed at high school teachers.

Fox has also mentored other STEM teachers, developed computer science content for K-8 students in other local school districts, started a Computer Science Teachers Association chapter for Northern Indiana and organized a backpack program for Prairie Vista students to complete computer science activities at home, including during the pandemic.

In addition to broadening students’ perspectives around science and technology, Fox’s efforts have contributed to the development of a framework for K-12 schools to meet new state standards around computer science designed to better prepare students for the future.

“Computer science is more and more pervasive,” Niemier said. “So having a foundation for seniors as they graduate high school will be useful for when they move onto college” or other educational or career opportunities.